A not very timely update on the July book

While I waited for the delivery of a book I ordered online — which turned out to be not in-stock, and the company had emailed me a week ago asking if I wanted them to order it from the supplier and apparently took no reply as a “no”, nevertheless 3 weeks later I have the book, Famous Last Lies, An Anthology by Claire Cock-Starkey — I started listing influential people in my life. Massively-long-run-on-sentence notwithstanding, these are “influential dead people” and moreover “influential dead people I have never met”. So when I finally go the book, I could look up their famous last words and start to put together the book.

My wallpaper and I are fighting a duel to the death. One or other of us has got to go.

Which he had actually said in the weeks leading up to his death and his actual last words were during his Last Sacraments and was the Prayer for Resignations to the Will of God.

Lord, if what I seek be according to our will, then let it come to pass and let success attend the outcome. But if not, my God, let it not come to pass. Do not leave me to my own devices, for you know how unwise I can be. Keep me safe under your protection Lord my God, and in your own gentle way guide me and rule me as you know best. Amen

The book Famous Last Lies, An Anthology does actually point out a couple of this faux last words. However, the list of corrections are not terribly exciting or numerous, so the I decided to change the direction of the book.

The book is still titled Famous Last Lies to which one of my friends quickly quipped.

That’s such a Jayden title!

I guess my lust for all things fraudulent is a defining characteristic of myself. And most of the layout and design of the book remains the same, but instead of correcting their last word I just quote the most-often-quoted-and-easily-referencable-and-maybe-not-completly-factually-accurate version of their last words along with an equally millennial and bashfully literary ignorant 140-chacter tweet length biography.

The only thing left to discuss is the length of the book. How many people will I include? Who do I include? I didn’t want to arbitrarily choose a number, I would need to find some meaning behind the choice and relate that back to the work. I first thought 52, for 52-weeks in a year, 52-cards in a deck, etc. But that was too numerous. Next up, is 42, for obvious reasons — for those who don’t find this immediately obvious, Douglas Adams said “42 is the answer to the meaning of life, the universe, and everything.”. All of these are probably too expensive to then print, so I decided on the sickeningly cliche choice of 13.

At some stage I decided to also write a series of 3 essays on Life, Liberty, and the Pursuit of Happiness which is a horrifically American thing to want to write about, but I found a screenshot of this on my desktop which probably explains the latent thoughts in my brain that made me think this was a good idea.

With the inclusion of the 3-essays I decided to reduce the number of people by 1 and have 12. This way I can weave in the 3-essays in a natural way.

And hence the now complete and ready show title page. 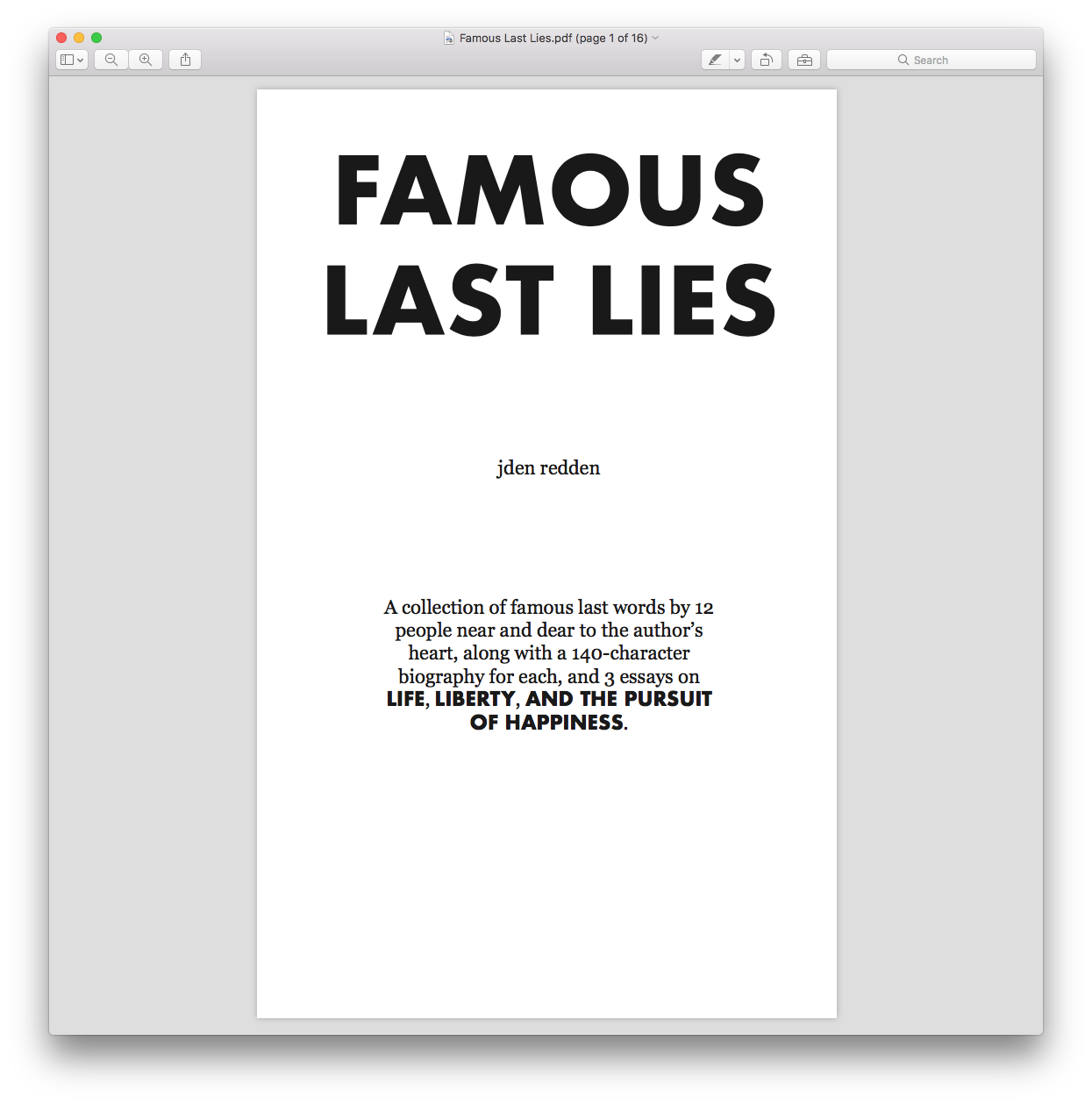