This is my blog, I call it, The Gospel According to jden, I write about my projects, obersvations about technology and the arts and cultural sector, with a specific focus on the Australian realm.

Subscribe to the newsletter to recieve an email once a week with new blog posts.

Filter the archive by: year, category, or by tag.

I’ve been slowly putting together my own Contax Zeiss cine prime set, and found myself making crazy Excel Spreadsheets as I try to piece together a nice set of primes from the Contax Zeiss range. In this post, I’ll show you all my working and show you how to build your own set of Contax Zeiss glass, and show you some sets that other people have put together.

During the mid-1970s, Carl Zeiss of West Germany partnered with Yashica in Japan to launch a new line of Contax SLR cameras. Together, the two companies created the Contax/Yashica (C/Y) mount. The partnership of the two companies produced a set of extremely high quality lenses built from Carl Zeiss designs. The lens were manufactured in both Germany and Japan, and with two different aperture varieties.

The lenses have remained popular with collectors and film makers alike for the close resemblance to Carl Zeiss Super Speeds cinema prime lenses. The lenses carry a similar design, build quality, and aesthetic with the the Super Speeds that can go for several-to-tens-of-thousands-of-dollars per lens. Comparatively, Contax Zeiss lenses can be had for hundreds to low thousands.

What if Australia had the Electoral College?

Who would be Australia’s hypothetical President?

How does the Electoral College work?

The Electoral College is a group of presidential electors that have the sole purpose of electing the president and vice-president. Each state (and the District of Columbia) has a number of electors equal to the number of congressional seats in that state — that is — one elector for every United States senator and one elector for every United States congressperson in the state. There are total of 538 electors (and thus electoral votes), made up of 100 Senate seats and 438 House of Representative seats, and an absolute majority of 270 or more electoral votes are required to elect the president and vice president.

Generally, it is a winner-take-all method in each of the states (and D.C.), except for Maine and Nebraska which have a one-elector-per-district method.

How to construct a vintage cine prime lens set

I recently purchased myself a vintage Nikon EL2 35mm film camera — I totally love it — and it came with a Nikkor AI 50mm f/2.0 lens. I decided to revive my lens collecting hobby and finally complete my Nikkor prime set — which I want to cine-mod. A few years ago, I picked up a BlackMagic Pocket Cinema Camera, which came with a few Nikkor primes and a MetaBones BMPCC to Nikon SpeedBooster, and I fell in love with these Nikkor primes. They are absolute tanks, solid metal construction, engraved markings, amazing optical quality and relatively cheap to pick up these days.

Even in Australia, there is a pretty good market for vintage Nikkors, and we are close enough to Japan that I have access to that huge secondhand market for relatively okay shipping. I will have another post going into detail about what lenses from the Nikkor AI/AI-S series you should pick up to put together into a prime set, but for now I want to write about how to construct a set of prime lenses. Starting from a basic 3 lens set to a massive 11+ lens set and specials that cover a wide range focal lengths.

What is a cine prime set?

When someone says the phase “cine prime set”, many filmmakers will immediately think of lenses like the Zeiss Super (Standard) Speeds, or Arri-Zeiss Master Primes, Cooke S4 Primes or maybe Leitz Summilux-C Primes. But what exactly is a cine prime set?

Don't call it a comeback

After a long break in blogging, I am making a come back. I have spent alot of my newly found Covid-19 free-time finishing off my blog migration from Ghost to Jekyll; and otherwise updating and fixing my website from being a very very boring single page website to something that actually represents me on the web.

In the coming blog posts I will post about various technical points of interest I came across building this website. Additonally, I will be slowly introducing various categories, verticals, columns to write about a broad variety of subjects. In the interium to avoid missing out any of my frequently updated blog posts you can subscribe to my newsletter below.

This month I will do something I have been talking about for a long time. I am going to start a podcast.

It will be called Multi-disciplinary, an infrequent conversation about diverse and numerous creative fields.

The idea will be that I will talk to and interview—slash—hangout with creatives from different fields — hence multi-disciplinary.

As is becoming a regular event on this blog, it is now August 7 and I am announcing the project for this month.

In the months of August and September Spoken Word SA is holding the heats for the 2017 Poetry Slam, so naturally I am going to enter and hopefully win (I won’t). The first heat is the 18th of August and the last is 15th of September with the final on the 22nd of September.

I have had the tab open for this for pretty much 6-months, and have not started working on anything in that time, which is why I am setting this as a project. For most people (myself included) see slam poetry as probably something like this.

A not very timely update on the July book

While I waited for the delivery of a book I ordered online — which turned out to be not in-stock, and the company had emailed me a week ago asking if I wanted them to order it from the supplier and apparently took no reply as a “no”, nevertheless 3 weeks later I have the book, Famous Last Lies, An Anthology by Claire Cock-Starkey — I started listing influential people in my life. Massively-long-run-on-sentence notwithstanding, these are “influential dead people” and moreover “influential dead people I have never met”. So when I finally go the book, I could look up their famous last words and start to put together the book.

My wallpaper and I are fighting a duel to the death. One or other of us has got to go.

Most tortured souls spend the day-time pretending to be a starving artist and the on prowl for grants and other large sums of money to fulfil their creative vision that no one else wants to pay for. 11-months out of the year this is me. So why did I turn down a grant of $2000?

I live in the-city-I’m-beginning-not-to-hate of Adelaide in Australia, we are a small microcosm of artistic endeavours and other fun things. Once such organisation which strives to bring “streets and public spaces to life through a series of activations, events and projects” is Splash Adelaide. So you can imagine my surprise when they gave me $2000 to put on an event. I had emailed them at 11:56 PM — for a 12:00 AM deadline — a hastily written, rorted with spelling mistakes, and grammatically questionable proposal for a previously aborted event called MAGIC x WINE. They liked the idea, but didn’t like the wine part, aiming for something a little more PG-13. And so started the journey to today where I finally pulled out of the Splash Adelaide Winter season.

The red herring should have been the breaking down of the original vision when they wanted to get rid of the wine — and when the title consists of two elements and one of them being wine, its not a great place to start. I had a meeting with my frequent collaborator and we came up with some other ideas for the evening including — but not limited to: an infinity cube of mirrors, The Adelaide Festival of Magic, taking over a carpark for a magic show, a gala show and dinner, and some other ideas that I can’t surmise in a handful of words.

An exercise in composition

To anyone who follows me on Instagram — @jden — have probably already noticed a particular style of my photos, and what often follows is,

Why are you all your Insta photos blurry? 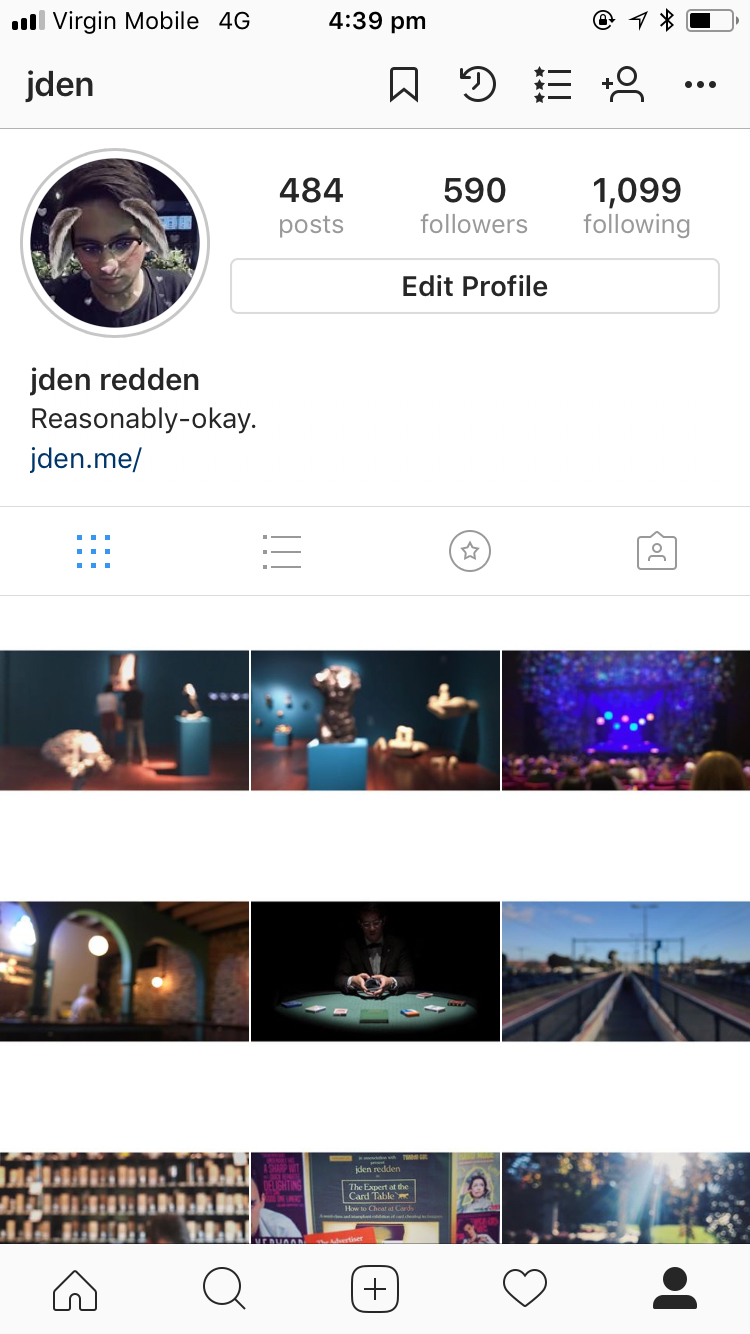 Time for a project that I can actually start and finish in the one month allocated, alas I am posting this on the 9th day of July — the deadline is still within reach. For the months of July I hope to write a book, but rather than 100% original content it will focus of a tried and tested skill of mine and that is desktop publishing and layout.

The premise of the book is a compilation book of famous last words of some famous people, but will focus on how often these last words are actually not really their last words and hence famous last lies. I am not sure how many of these I will be able to uncover in the complete set of; famous last words, the dispute, and finally the actual last words. But nevertheless this will be nice design challenge and editorial challenge as I write very short bio’s of these famous people to go along with their words. Also an exercise in searching WikiMedia for public domain images of famous (dead) people.

The end goal will be to have this available as a hardcopy book and for sale on Amazon, all independently published. I will be using Blurb to have the book printed and distributed, I’ve not used them before but they look pretty cool.