What if Australia had the Electoral College?

Who would be Australia’s hypothetical President?

How does the Electoral College work?

The Electoral College is a group of presidential electors that have the sole purpose of electing the president and vice-president. Each state (and the District of Columbia) has a number of electors equal to the number of congressional seats in that state — that is — one elector for every United States senator and one elector for every United States congressperson in the state. There are total of 538 electors (and thus electoral votes), made up of 100 Senate seats and 438 House of Representative seats, and an absolute majority of 270 or more electoral votes are required to elect the president and vice president.

Generally, it is a winner-take-all method in each of the states (and D.C.), except for Maine and Nebraska which have a one-elector-per-district method.

Adapting the Electoral College for Australia

There are currently (in descending order): 47 House seats in New South Wales; 38 in Victoria; 30 in Queensland; 16 in Western Australia; 10 in South Australia; 5 in Tasmania; 3 in the Australian Capital Territory; and 2 in the Northern Territory.

Finally, we can add the House seats to the fixed number of Senate seats and come up with our hypothetical Electoral College.

With only 8 states and territories — compared to the 50 states (and D.C.) in the United States — Australia has a much smaller universe of possible paths to victory under the Electoral College.

A party cannot win with New South Wales (59), Victoria (50), and the Northern Territory (4) — with the smallest number of votes available. This path would net a frustrating 113 electoral votes, representing 59.6% of the population — just one electoral vote short of a victory.

Although a combination of New South Wales (59), Victoria (50), and the Australian Capital Territory (5) would secure the smallest possible majority of 114 electoral votes, representing 58.8% of the population.

The most minority rule path to victory would be Queensland (42), Western Australia (28), South Australia (22), Tasmania (17), and the Australian Capital Territory (5) for 114 electoral votes from just 40.4% of the population. That means 79.8% (59.6% from the other states, plus half plus 1 of the 40.4% required) of the population could vote against the a hypothetical president and still win the presidency through this minority rule bias present in the Electoral College.

Australia is different to the United States in that we have a quasi multi-party system with two main ‘parties’ through a coalition. The Liberal-National Coalition is an alliance of centre-right political parties that form a Coalition that for most (not all) purposes can be viewed as one-party. On the other hand, there is the Australian Labor Party, which is the centre-left duality of the Coalition. Together, they form the two-party political system for Australia. The third largest party is the Greens which garner around 10% of the popular vote.

There are two ways to map the Electoral College onto Australian politics. We can view the constitute parties within the Coalition as individual parties in their own right, or we can look at it as a two-party system.

Strictly speaking the Electoral College does not cater to political coalitions and goes on a first-past-the-post basis where the candidates with a plurality of the vote in a jurisdiction wins the electoral votes for that jurisdiction. Clearly, this first-past-the-post system disadvantages the Coalition in Australia, as the constitute parties will split the centre-right vote over multiple candidates.

Electing a President in the 2019 Federal Election

The most recent Australian Federal Election occurred in 2019 where the Coalition won the control of both Houses of Parliament under Prime Minister Scott Morrison and Deputy Prime Minister Micheal McCormack.

Results after the 2019 Federal Election

The House of Representatives

If we take the top-of-the-line results and do not account for preferential voting the popular vote winner in each state and territory went as follows.

Note: Here the Coalition is separated out into the constitute parties.

Under this system Labour has a clear path to victory claiming the two largest states of New South Wales and Victoria and collecting the three smallest states and territories with an Electoral College victory of 135 electoral votes of the required 114 electoral votes to win.

The full results are: 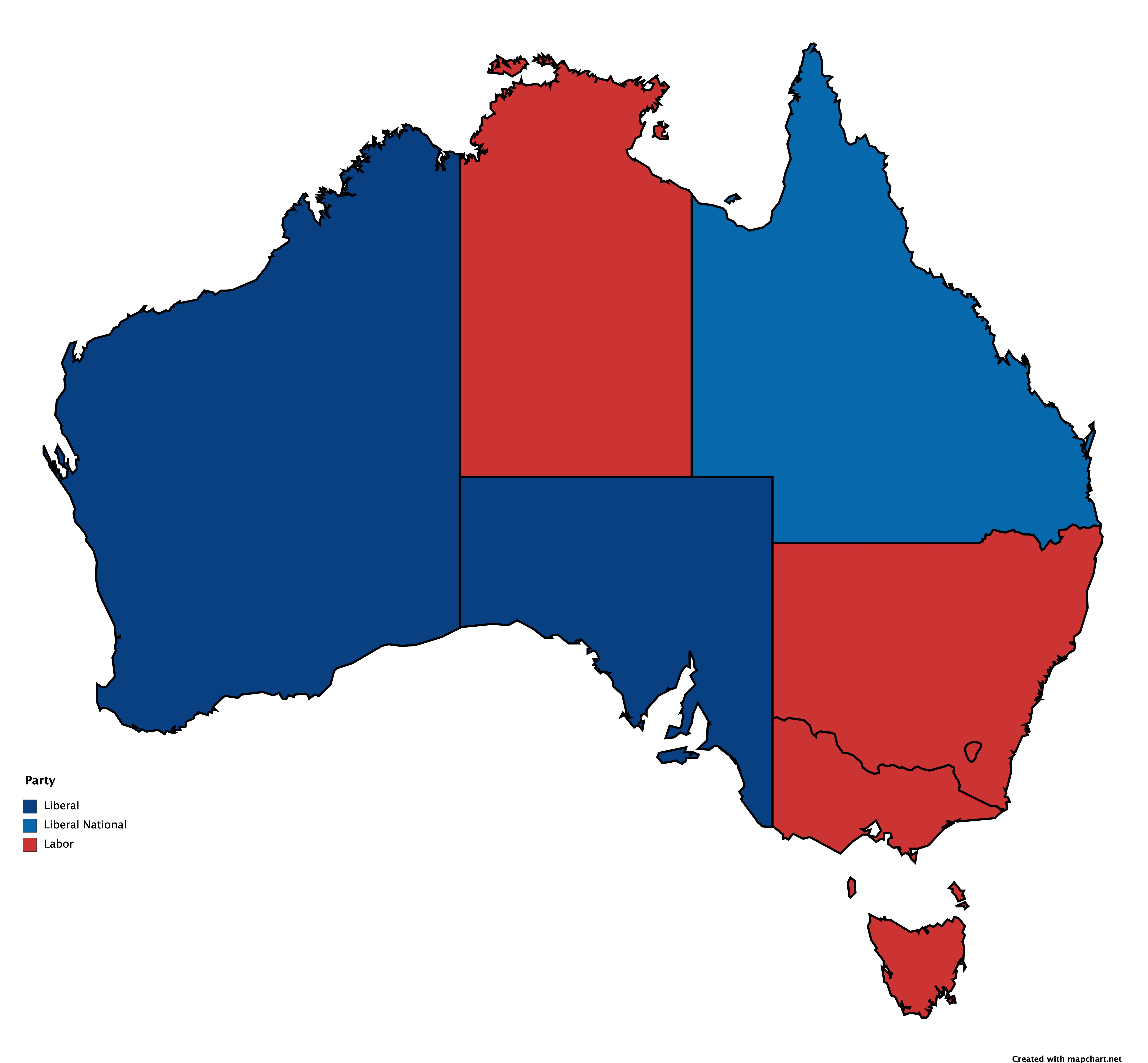 In this hypothetical Electoral College, Australia would have elected President Bill Shorten and Vice-President Tanya Plibersek with a plurality popular vote of 34.7% on a first-past-the-post basis.

This result is not really reflective of the reality, as Labor is more likely to win a plurality before the effects of the Coalition’s alliance are accounted for due to the Coalition stratifying the centre-right vote.

Most discussions of Australian politics revolves around a two-party-preferred system, where the effects of the Coalition are taken into account along with preferences from other parties. More specifically, in the House the instant-runoff voting system is used.

Under the two-party-preferred system the results were:

In this case, the Coalition have the path to victory through: New South Wales; Queensland; and Western Australia, providing them with 129 of the 114 electoral votes required to win. Labor collects the second largest state in Victoria and collected the four smallest states and territories for 98 electoral votes. 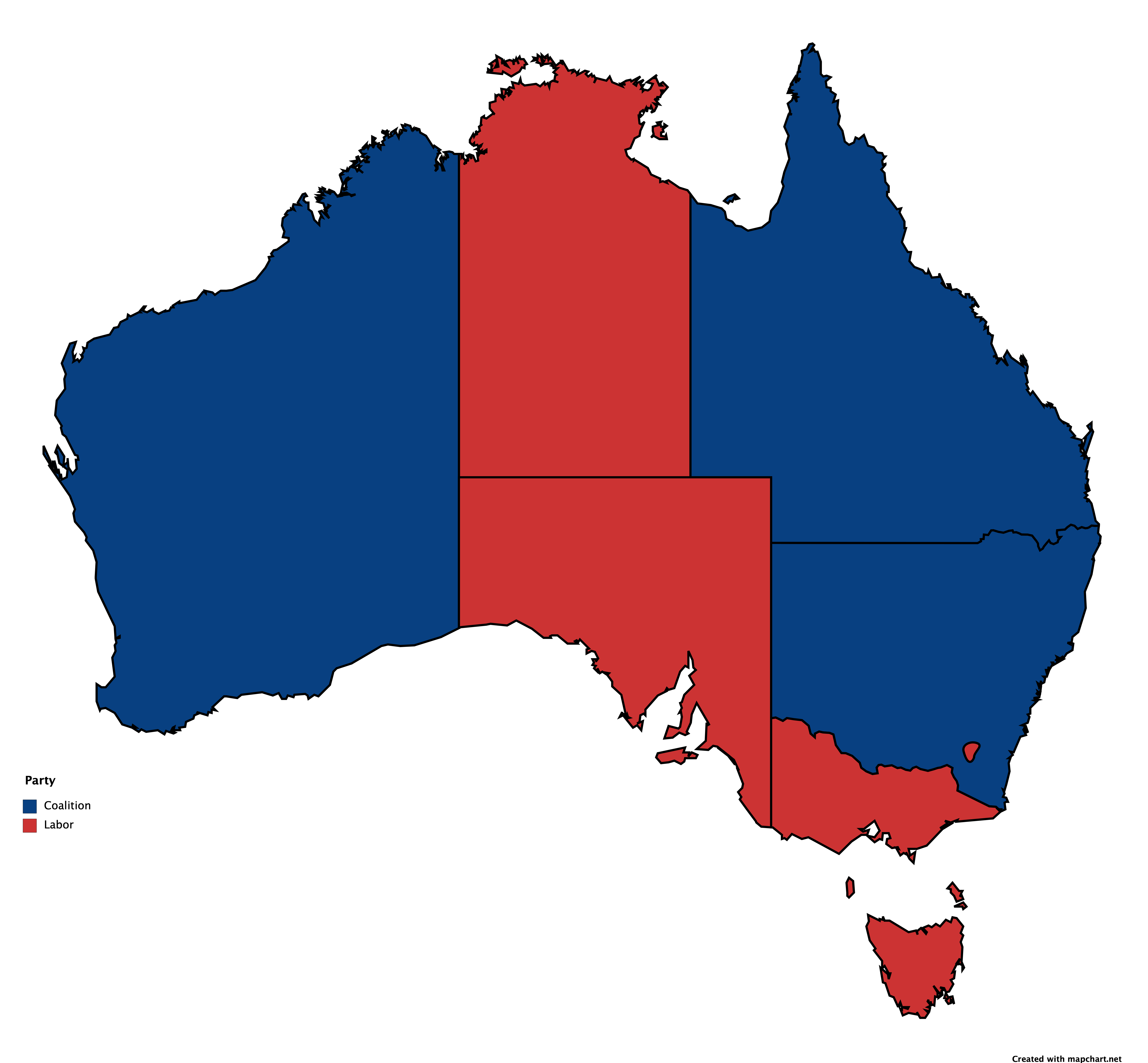 In this hypothetical Electoral College, Australia would have elected President Scott Morrison and Vice-President Micheal McCormack with a majority 51.5% of the two-party-preferred vote. For those playing at home, they will know this was the actual result of the 2019 Federal Election with the Coalition winning a majority of the seats in the House.

Does it match the popular vote?

Swing states and the tipping point

Under the first-past-the-post system, Queensland and Western Australia are very safe states for the Liberal National Party and the Australian Liberal Party respectively, and to a lesser extent South Australia is fairly safe for the Liberal party. On the other hand the Australian Capital Territory is a safe Labour state. The rest are all within 5%, and can be our swing states. Both New South Wales and Victoria are within 2.5%, with massive Electoral College wins available with 59 and 50 electoral votes respectively.

The tipping point state — the state which takes Labor over the 114 threshold is Victoria won by 1.98%.

Under the two-party-preferred system, Queensland and Western Australia are again very safe states for the Coalition with a combined 92 electoral votes. The Electoral College heavily favours the Coalition with 92 of 114 electoral votes held in very safe states with greater than 10% margins. Tasmania and the Australian Capital Territory are safe Labor states.

The tipping point state for the Coalition is New South Wales which was won by 3.56%.

The Electoral College is a horrible system for electing a president and should be abolished in the United States. Biden is on track to win the most votes every by a candidate and have one of (if not the largest) popular vote victories of all time, yet for the last week, the world was hyper-focussed and was only talking about tens of thousands of votes in a few counties that ultimately decide the winner of the Electoral College.

You can pick flaws in the Australian electoral system, but is a much better way to elect a leader than the Electoral College. It was a fun little project though.